How have subnational inequities evolved in the U5M Exemplar countries?

Simon Hay over 2 years ago

Investigating local variation in child health is a critical first step towards understanding the successes of the U5M Global Health Exemplar countries. There is a lot of variation in access to primary healthcare within countries. Children in one village may have access to a health clinic and school, and five miles away on the other side of a river, children may have neither. All of this impacts their health.

In 2019, we mapped child deaths at the subnational level for 99 countries, including the Exemplars. The results help answer a fundamental question: how did each country deliver on its mandate to equitably improve the health of all its citizens?
The answer is complex but reveals the importance of looking at subnational equity rather than just country-wide progress. 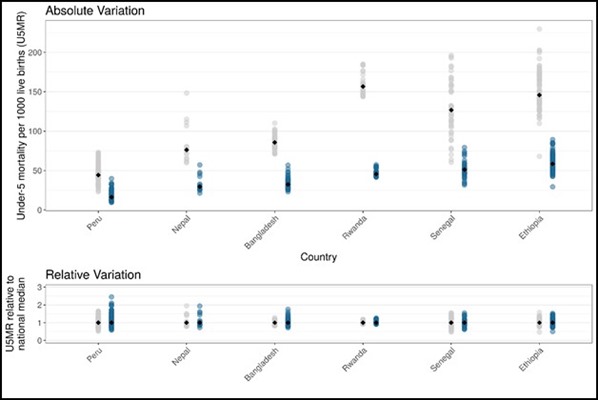 The top chart, which plots the absolute U5M in each country and year, shows the absolute geographic variation within each country. In all of the Exemplar countries, the absolute difference in U5M between the best- and worst-performing units declined between 2000 and 2017. In Senegal, this disparity more than halved, shrinking from 136 deaths/1,000 live births in 2000 to 48 deaths/1,000 live births in 2017. In Nepal, Bangladesh, and Rwanda, the unit with the highest mortality rate in 2017 was still lower than the unit with the lowest mortality in 2000. Our analysis demonstrates that the Exemplar countries are outstanding both for their substantial declines in U5M across all units as well as their improvements in absolute inequality since 2000.

However, when assessing geographic variation in U5M relative to the country average, a more complex picture emerges. The distribution of U5M on the second chart, which has been normalized to the median mortality rate across each country-year, shows relative inequality over time. Unlike absolute inequality, relative geographic inequality has remained stable or even increased in the Exemplar countries since 2000.

The particular successes and challenges of implementing evidence-based interventions (EBIs) for child health in each of the Exemplar countries can shed light on why relative geographic inequality persists even in the face of substantial U5M declines.

By examining local variation in both implementation and outcomes, the Global Health Exemplars project offers a starting point for understanding how countries have tackled stubborn geographic disparities in child health. Across most of the study countries, nationwide vaccination programs and preventative neonatal interventions successfully reduced within-country inequities in child health.

As one example, strong community health worker (CHW) programs allowed countries to deliver care to rural, remote, and pastoral communities—by sustainably growing the skills and compensation available to CHWs, countries have an opportunity to increase geographic access to critical interventions for child health. Applied in a locally-appropriate context, these findings and others can help countries realize the promise of healthy children nationwide.